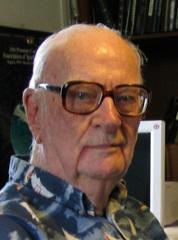 Sir Arthur Charles Clarke, CBE, FRAS, Sri Lankabhimanya, (16 December 1917 – 19 March 2008) was a British science fiction author, inventor, and futurist, famous for his short stories and novels, among them 2001: A Space Odyssey (1968), and as a host and commentator in the British television series Mysterious World. For many years, Robert A. Heinlein, Isaac Asimov, and Clarke were known as the "Big Three" of science fiction.

Clarke served in the Royal Air Force as a radar instructor and technician from 1941–1946. He proposed a satellite communication system in 1945 which won him the Franklin Institute Stuart Ballantine Gold Medal in 1963. He was the chairman of the British Interplanetary Society from 1947–1950 and again in 1953.

Clarke emigrated to Sri Lanka in 1956 largely to pursue his interest in scuba diving; that year, he discovered the underwater ruins of the ancient Koneswaram temple in Trincomalee. He lived in Sri Lanka until his death. He was knighted by Queen Elizabeth II in 1998, and was awarded Sri Lanka's highest civil honour, Sri Lankabhimanya, in 2005.