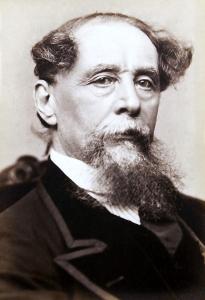 Charles John Huffam Dickens (7 February 1812 – 9 June 1870) was an English writer and social critic who is generally regarded as the greatest novelist of the Victorian period and the creator of some of the world's most memorable fictional characters. During his lifetime Dickens' works enjoyed unprecedented popularity and fame, but it was in the twentieth century that his literary genius was fully recognized by critics and scholars. His novels and short stories continue to enjoy an enduring popularity among the general reading public.

Dickens rocketed to fame with the 1836 serial publication of The Pickwick Papers. Within a few years he had become an international literary celebrity, celebrated for his humour, satire, and keen observation of character and society. His novels, most published in monthly or weekly instalments, pioneered the serial publication of narrative fiction, which became the dominant Victorian mode for novel publication. The instalment format allowed Dickens to evaluate his audience's reaction, and he often modified his plot and character development based on such feedback.

Dickens was regarded as the 'literary colossus' of his age. His 1843 novella, A Christmas Carol, is one of the most influential works ever written, and it remains popular and continues to inspire adaptations in every artistic genre. His creative genius has been praised by fellow writers—from Leo Tolstoy to G. K. Chesterton and George Orwell—for its realism, comedy, prose style, unique characterisations, and social criticism. On the other hand Oscar Wilde, Henry James and Virginia Woolf complained of a lack of psychological depth, loose writing, and a vein of saccharine sentimentalism.