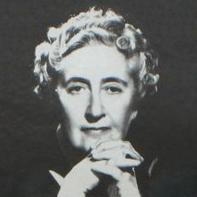 Dame Agatha Mary Clarissa Christie DBE (née Miller; 15 September 1890 – 12 January 1976) was a British crime writer of novels, short stories, and plays. She also wrote romances under the name Mary Westmacott, but she is best remembered for her 66 detective novels and more than 15 short story collections (especially those featuring Hercule Poirot or Miss Jane Marple), and her successful West End plays.

According to the Guinness Book of World Records, Christie is the best-selling novelist of all time. Her novels have sold roughly four billion copies, and her estate claims that her works rank third, after those of William Shakespeare and the Bible, as the most widely published books. According to Index Translationum, Christie is the most translated individual author, with only the collective corporate works of Walt Disney Productions surpassing her. Her books have been translated into at least 103 languages.

Agatha Christie published two autobiographies: a posthumous one covering childhood to old age; and another chronicling several seasons of archaeological excavation in Syria and Iraq with her second husband, archaeologist Max Mallowan. The latter was published in 1946 with the title, Come, Tell Me How You Live.

Christie's stage play The Mousetrap holds the record for the longest initial run: it opened at the Ambassadors Theatre in London on 25 November 1952 and as of 2012 is still running after more than 24,600 performances. In 1955, Christie was the first recipient of the Mystery Writers of America's highest honour, the Grand Master Award, and in the same year Witness for the Prosecution was given an Edgar Award by the MWA for Best Play. Many of her books and short stories have been filmed, some more than once (Murder on the Orient Express, Death on the Nile and 4.50 from Paddington for instance), and many have been adapted for television, radio, video games and comics.