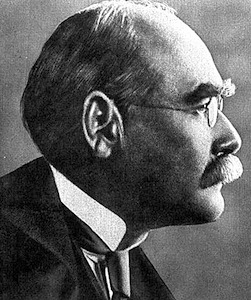 Joseph Rudyard Kipling (30 December 1865 – 18 January 1936) was an English short-story writer, poet, and novelist chiefly remembered for his tales and poems of British soldiers in India, and his tales for children.

He was born in Bombay, in the Bombay Presidency of British India, and was taken by his family to England when he was five years old. Kipling is best known for his works of fiction, including The Jungle Book (a collection of stories which includes "Rikki-Tikki-Tavi"), Just So Stories (1902), Kim (1901) (a tale of adventure), many short stories, including "The Man Who Would Be King" (1888); and his poems, including "Mandalay" (1890), "Gunga Din" (1890), "The White Man's Burden" (1899) and "If—" (1910). He is regarded as a major "innovator in the art of the short story"; his children's books are enduring classics of children's literature; and his best works are said to exhibit "a versatile and luminous narrative gift".

Kipling was one of the most popular writers in England, in both prose and verse, in the late 19th and early 20th centuries. Henry James said: "Kipling strikes me personally as the most complete man of genius (as distinct from fine intelligence) that I have ever known." In 1907 he was awarded the Nobel Prize in Literature, making him the first English-language writer to receive the prize, and to date he remains its youngest recipient. Among other honours, he was sounded out for the British Poet Laureateship and on several occasions for a knighthood, all of which he declined.